Daniel Levy thought he could finally shaft Arsenal this summer, by delaying the Bale transfer until after the NLD, knowing we had an interest in at least one of Real’s Galacticos, with his expectation that there would be too little time to complete a deal in the transfer window.

He had been feted for most of the summer for his transfer finesse in first hiring Baldini as his Director of Football, and then executing 7 transfers to catapult their club finally out of our shadow.

In his mind he played the Headlines: “Levy Demonstrates Complete Mastery of The Transfer Window.”

Alas, it was not to be. In a tale of Shakespearian drama, Levy’s kingdom unravels in a manner not seen since King Lear relinquished his crown to his daughters.

It deserves an analogy. But what analogy…

Football is pretty simple, really. But relationships… they can be so complicated, can’t they? So why do we use relationship analogies which are actually complex to explain stuff that goes on in football, stuff that we really already understood perfectly well. Exhibit A: how the transfer window works…

Towards the end of the transfer window, every journalist, blogger and tweeter had come up with some variation of the “It’s like wandering around a night club in the last 5 minutes trying to score with a bird to take her home.”

So, why do we do these relationship analogies? They don’t make anything clearer really, do they? Did you understand the end of the transfer window more fully, after the deluge of nightclub analogies? I know I was clearer before I heard them.  In fact, then I started to confuse myself by trying to tweak and improve the analogy. It seems they had left so many dimensions of this complex scenario unexamined. Was she shit-faced and legless. Would she need a medical at Colney to make sure I didn’t get an STD? Would she have to run around in a rubber suit until I knew she was staying at the club long-term?

And what to do with her less attractive, less fit mate. Do I have to drop her off at her place so I didn’t look like an unfeeling bastard, even though I didn’t give a toss if she got murdered on the way home. Afterall, that old slapper was going to wobble out of there happily sloshed before I showed up with BMW keys.

And, it’s what we humanoids do. We explain stuff to each other with analogies, necessary or not.

So, what to make with Tottenham’s special relationship with Real Madrid? What relationship analogy would help us understand that “Special Relationship.”

Which prompted this delicious response from the Spuds… 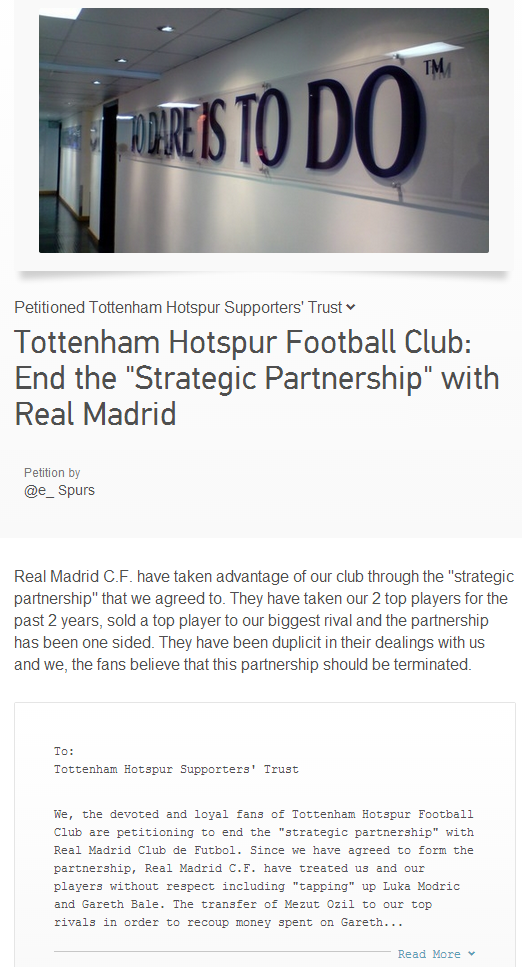 Hmmm, yep. How do you adequately conjure up an analogy that imparts a deeper understanding of Tottenham’s Special Relationship with Real Madrid. Well, here is my best shot…

The Special Relationship Tottenham thought they had with Real Madrid…

Yes, sure they knew they would have to wear a gimp suit. Or at least that was their assumption when they wandered in and found the suit stretched over the back of a chair.

Alas, like in all relationships there is so much room for misinterpretation, so much left unsaid, and so many assumptions made. So often, we don’t want to spoil the romance, and so we don’t actually ask the fundamental question.

Hence it was to Daniel Levy’s great surprise and horror that, upon descending to the basement of the Bernebeu with Perez, he discovered Ivan Gazidis pulling on the Gimp suit and then launching zestily into an energetic limbering and stretching routine, before emitting a series of shrieks and snorts. Levy worried to himself as he watched Gazidis leaping around, resplendent in tight leather, “This is not exactly how I saw today playing out.”

Yes, this suit of black leather and zippers was not for him. But he should not have worried. He would still play an essential role in this special relationship – he and Baldini had there own special outfits to wear, so they wouldn’t feel left out. Nor should they. They were, afterall, central to this most “special” of relationships.

The Special Relationship Tottenham actually had with Real Madrid…