Aaron Ramsey, Lord of The Overload

Lord of The Overload.

And the Lord spake further: “Let me be more specific, as I have had complaints in the past from people saying they weren’t really sure what I was getting at. For example: where do I stand on Holy War. Well, I can only apologize. To be honest it does depend a lot on the mood I was in when I was making the pronouncement. So here is what I mean in this specific case…

It’s about football. Football is all about the overload, players showing to form a triangle to create options in numbers, faster than the opposition can set up to defend against it, and with a numerical advantage. I hope that was obvious all along, But I’m sure the usual suspects got that completely arse over tit. So, there! Don’t kill anyone over this. It’s about football. Triangles. Overloads. Oh and circumcision is silly. I’m not sure how that all got started.

Oh. And Aaron Ramsey is my Son in whom I am well pleased. Hence forth he shall be called “Lord Of The Overload.” 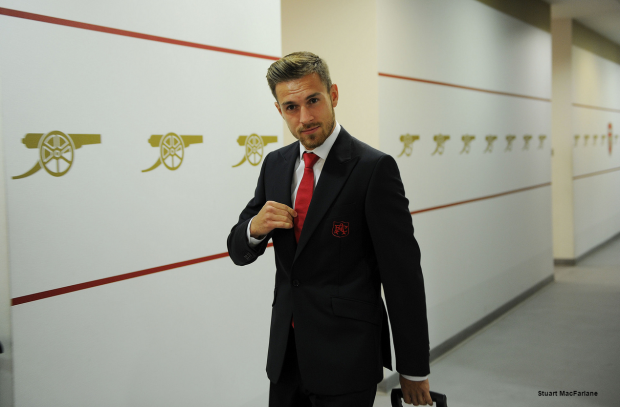 And lo and behold, doesn’t Wenger tell Ramsey he’s starting from the right but not to worry about any of that position bollox when we have the ball. But to get out there, make his runs, cause the overload.

If he really was Lord Of The Overload, I guess he was involved in a lot of our top passing combinations against Palace? 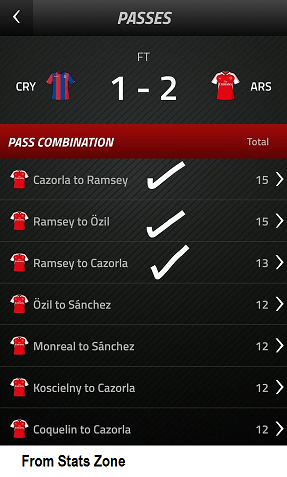 Here are Ramsey’s touches in the attacking half against Palace. 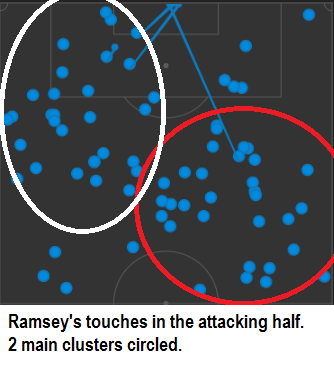 It has 2 main clusters. It’s most advanced and attacking cluster is high up on the left wing. The boy travelled.

Interesting for a man that started the match on the right wing. This is the touch pattern of a man who has been told he has one weekend away from his lady, a certain Ms. Rightwing, and that there would be no questions asked. He is off to Vegas for Hangover 7. He wakes up drunk by the left corner flag, spooning Ozil, with a tiger in the bathroom, a tiger Sanchez is now trying to drag down to the beach so that it can motivate him to run faster sprints.

Ramsey also had 4 shots on goal against Palace. That’s striker levels of attacking.

Where Ozil sprinkled his 74 touches mostly in the left attacking wing, Ramsey shared his 95 touches of the ball equally in the attacking half of the pitch. Have ball? Will travel. But he did his most advanced work on the left side, interestingly, mainly because that’s where Ozil and Sanchez were hanging for most of the game.

Here are Ozil’s touches for the attacking half… 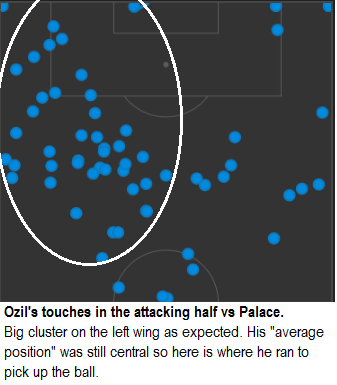 So, that would be why the Lord Of The Overload spent so much time out on the left.

In contrast, Ramsey’s touches in the defensive half were all by and large on the right side as he fell back into position to cover Bellerin. 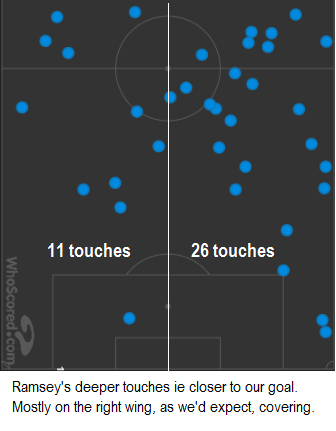 But clearly, to be able to wander so freely to the left side of the pitch in attack you’d need some pretty effective cover in midfield. Someone with athleticism of his own, able to cover the ground, make the tackles, block the channels for that extra second or 2 so you can scamper back to the bottom right side from the top left corner. Someone like, say, Francis Coquelin.

It would be ironic indeed if the player that some seem to resent for somehow displacing Aaron in midfield was actually part of a partnership that enabled Aaron to finally play his full unexpurgated game again, albeit from the right, following a long Arsenal tradition of devilment-makers on the wing.

The Merits Of Discombobulation

When I compared the EXPECTED GOALS charts between the West Ham and Crystal Palace matches, a few things struck me. As I remembered it, we created enough chances in both matches to win the games. Dumb errors against West Ham cost us 2 goals and we didn’t convert any of our chances. 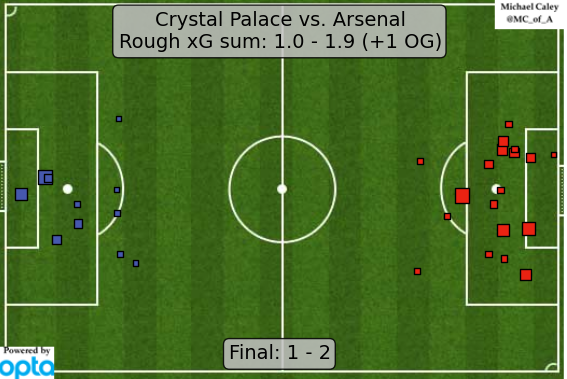 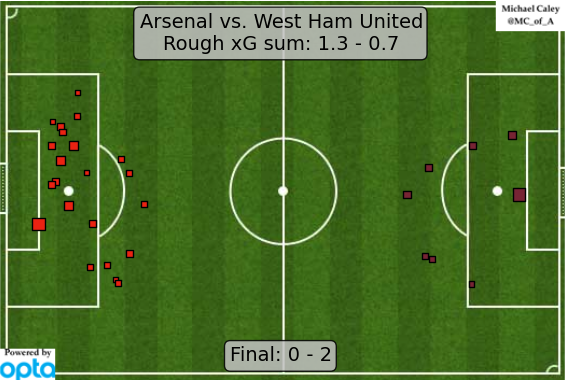 But they don’t tell the full story. The chances we got against Crystal Palace were better – not because they were slightly more numerous and certainly not because of better positions. They were because we had Palace’s defence all moved around and tangled, so there were fewer blocks and less organization in the attacker’s way. Think of the 2 or 3 chances Alexis had and the goal mouth scrambles. Getting the ball into an attacking position is one thing. Making their defence discombobulated when you get there is another thing. Overloads and runs in behind do that for you.

The charts of Expected Goals are helpful but they don’t reflect the degree of discombobulation you have put their defence into.

Theo talked about who he modelled himself on, and one of his heroes was Freddie Ljungberg because of the intelligence of his runs. Theo and Ramsey are mates and play golf together. I suspect they have talked about Ljungberg up one side and down the other (a bit like Ramsey’s pitch movements, Ba Boom!). Goonerdave66 did a great piece which among other things likened Ramsey and Ljungberg. Where Ramsey starts the game from may not be that important. As long as he can get into the attacking third and be where the action is, make his runs, cause his overloads, press the opposition, and still make it back in time for dinner, I mean, to cover his defensive duties, do we care? Does he care? I doubt it. 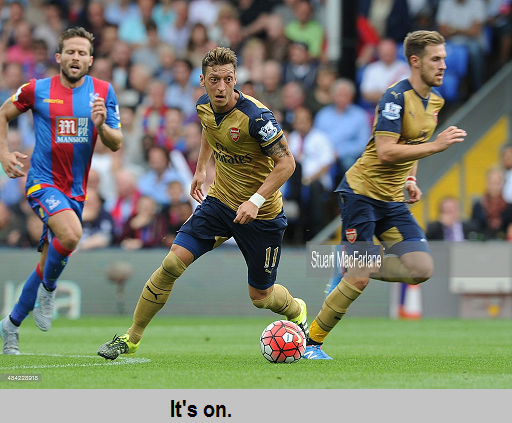 And there are matches where pressing is a key tactic for us. If Arsenal are going to press strategically from the front, having Sanchez and Ramsey as 2 of your front 3 is a great start. Ozil is very alive to the press using his game intelligence. But something else that would really help the press is a midfielder who is athletic and front-footed so that momentum isn’t lost if there is a pass that breaks the front 4. Coquelin is a man up for the press. Loves it. Does well at it.

Strangely the mismatch and conflict of ill-fitting pieces in midfield may be sorting itself into some order.

One might say “but this is the same line-up that became the First XI of the second half of last season.” Yet it seems to be applying a subtly different set of operating instructions, based on Ramsey’s comments on Wenger’s instructions. Aaeon spoke as if this was something new, and akin to “Go Forth And Overload. We’ve got you covered.”

There seems to be a queer turn against Coquelin by many since last season. You have all seen it, I’m sure. It pops up in blogs and tweets that hint or state that Coq’s partnership with Santi is blocking Ramsey’s return to the midfield as if that were somehow Coq’s fault. And if there is fault, why his more than Santi’s? Or even Aaron’s? After all, it is Wenger who says that no one passes from deep better than Santi and that his days on the wing are over now.

Some have said Coq is blocking the purchase of some other DM, like Schneiderlin, who isn’t a DM, and who Arsene must rate, I guess, but apparently never quite enough. Coq has blocked us getting Pirlo via the club’s Time Machine. Or stealing Matic from Chelsea with a 60m bid (even though Coq has been out-performing him.) Or maybe he blocked Vidal, not a DM. Or Kondogbia.

Of course it assumes whoever it was Coq stopped Arsene buying, despite the fact Arsene hasn’t bought a DM for 78 straight windows, would have formed a good partnership with Aaron. Basically, there is a whole lot of assuming going on and some strange logic but only one fact. Santi and Coq work.

There is a belief that this Cazoquelin pairing doesn’t work as well against weaker teams at the Emirates ie when we have lots of the ball and we could use an extra playmaker. Well, that’s one line of thought; a line of thought that simply didn’t work against Sunderland (0-0) at the end of last season. I would have said the last thing we needed was one more playmaker. A runner, a finisher, a speedster, a dribbler? Yes. One more technical passer to add to our usual plethora on the pitch at the same time? Not convinced. In my view too many playmakers are over-egging the pudding around their box and, before you know it, the opposition is bolting down the other end to hit us on the counter in the kind of situation where a Coquelin would come in handy, you would say, but he isn’t on the pitch.

Add to that the fact that Coq’s ability to athletically cover a lot of ground helps our attack when we have lots of possession anyway: The fullbacks (and others) can push forward with more conviction to give width, knowing Coquelin has them covered, rather than Santi’s little legs spinning as quick as he can make them to cover the opposition counter, as Aaron took off on a run to the byline.

It also gives Santi more freedom to push forward and join the attack without looking over his shoulder.

No. Not for me. It might sound clever on paper. But not on this piece of paper. Balance is balance. Coquelin gives the assurance to our mids, fullbacks and forwards that they can press home their advantage in a way no other pairing does, against big or small teams, home or away.

And, what’s not broken need not be fixed. Santi-Coq won us a long run of matches home and away. When we ran out of steam towards the end of the season, it was because we didn’t have enough cutting edge or enough threat in the attack and not because we needed an extra playmaker. Sanchez was pooped. Giroud was wrecked by Thierry Henry. Welbeck and Ox were injured.

Some have said that even when we win now we don’t play great football any more with Cazoquelin. I trust they didn’t enjoy the outstanding and thrilling football on display in the first half against Palace then.

Aaron is a great player. Arsene is right to fight to get our best players on the field together. Doubly so when that player is the Lord Of The Overload, a great player who enables the other players. And he is right to use Coquelin’s and Bellerin’s super powers to give Aaron free reign in the attacking half of the pitch while Santi pulls the strings.

Ironic it would be if it is Coquelin’s attributes that not only secure the midfield, enable Santi’s second coming as Pirlo, but most ironically of all, allow Aaron to showcase his acrobatics to their fullest by providing the safety net on the right side of midfield. Perhaps the clever interplay between Coq and Ramsey on the right touchline that started off our first goal was a symbol that it is not Coq versus Ramsey at all.

Give ‘em hell, Aaron, Lord Of The Overload!

20 thoughts on “Aaron Ramsey, Lord of The Overload”