It’s been a stressful last week or so for us Gooners. Everytime you turn around there’s an Open Letter from someone looking to “spin” the supporters and the media. Therefore, I thought I would lighten the mood with a piece, who’s only real point is… “Let’s chill out, relax, get along, and not take it all so seriously,” me included.
So…here is a “Fake News” piece.

Around the normally quiet hamlet of Ashburton Grove, there has been an alarming outbreak of a medical condition known as “Pitchfork Elbow. A doctor at a local emergency room commented: “Usually in the summer we see a lot of tennis elbow. But this year it’s all pitchfork elbow. It has the same symptoms as tennis elbow, but with extremely high levels of outrage.” 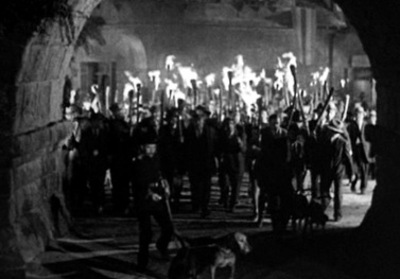 Outside in the streets we ran across a particularly rowdy rabble of townspeople holding pitchforks and torches. A blond haired young man wearing an Arsenal shirt volunteered: “Yeah, it’s been a blast the last few nights. Last night we were over outside the van Persie house and we were completely outraged. But there was a nice moment when Bouchra waved out the window at us. At least we think it was Bouchra and we think it was a wave.”

Another, Irish sounding, gent who would only give the name of Ronan, wearing an Arsenal Away yellow shirt offered: “Yeah, and when we were done there, it was off for a quick Nandos and then off to eff the horse Robin rode in on. The whole thing’s been brilliant craic, really.”

“But yeah, now that you mention it, I have been getting a bit of jip from me elbow. Not to mention the fact that I nearly burned me effin’ knuckles off last night when me torch burned all the way down! But all in all it’s been brilliant and I’ve made some great friends”

When asked where they were off to this evening, a third gent wearing a retro circa 1971 red Arsenal short-sleeved shirt said, “Well, tonight’s going to be a busy one. We just bumped into Timmy Payton and the AST crowd who were making their way from Ivan Gazidis’s house over to Peter Hill Woods house. They stopped and asked us for a light for their torches. Bit embarrassing really, ‘cos we were actually on our way over to Tim’s house to do a spot of outrage and indignance outside of his place. Still, every one took it in good spirits.”

Yet another irate towns-person said, “But later on we’re all meeting up outside Alisher Usmanov’s office. He’s going to be handing out hot cocoa and marshmallows, to keep everyone’s spirits buoyed. He’s been really supportive. Doesn’t seem to really mind who we’re threatening to burn down at all. He uses his little catch phrase and chuckles. You know the one he says all hip-hop like, “It’s all goooood!”

“Yeah, and we really needed a pick me up on Thursday night. There was a big balls up. I mean miscommunication. One half of us had come out as outraged that evening, while the other half were indignant. It was proper bedlam. We were out of whack for the whole evening and couldn’t work out what the problem was. Live and learn, eh?!.”

“Yeah, and then tomorrow evening, we’re all going out as a posse, which is my personal favourite. We’ll be doing a tour of the effing journos houses. Then we’ll stop in front of Theo’s before whipping back around to van Persie’s house to top off another good evening.”

Asked what exactly they were outraged about, their leader piped up: “This isn’t outrage, mate. This here is fucking righteous indignation!”

I again repeated the question. There was a long tense pause after which he coldly asked me: “So…where’s your house, mate?”

← Amy, Amy, Amy. Whatever will we do with you?
FergBeth, Ferglet, Fergello or King Fearg? →