Yes, it was only “Everton playing at home.” But still they put out a feared and respected set of players in attack, midfield and at wing-back on both sides.

We had just played a midweek match against the might of Barhhhehlllohhhnah yet it was Roberto Martinez who conceded that his team looked like they had just traveled back from a grueling European encounter while Arsenal looked rested and full of beans. That’s that Welbeck-led, Coquelneny backed, front-footed front 6 thing. It’s deadly.

And Martinez was right. We did. We looked revitalized. Or perhaps more correctly, we looked vitalized.

Let’s mention them stats. Coquelin had 12 interceptions and 15 ball recoveries or something? Numbers unparalleled for the last 7 PL seasons by anyone, we were told. But you don’t do this stuff alone. Here’s a stat to balance that out: Elneny ran for 12.5 km. Jaysus. (In fact, Coquelin clocked the 3rd highest kilometerage at 10.5 km.) Astounding.

12.5 km. Come on?! That’s beyond Ramsey territory, and yet if you watch what Elneny did for his 90 mins, he didn’t charge forward anywhere near as much as Ramsey would. Moe’s running was all in the service of midfield balance: offering an outlet for his partner, shuttling between defensive duties and providing a platform for the attack – an extra pair of feet to move the ball quickly.

To be honest, anything said of Elneny could be said of Coquelin too, but to a lesser degree. There was a division by degree of balance rather than by task. Coquelin the more defensive, Elneny the more attacking but only by degree. Both had yin and yang, but Coq had a bit more of the yin and Moe a bit more of the yang.

I can’t recall who said it, but in a previous outing they looked like they were joined by a 10 yard piece of rope, at least when we’re out of possession.

Just to underline the point, have a guess at the pair’s passing numbers. Go on. Have a guess. For fuck’s sake, guess! I’m not asking you to hack your own leg off. Just have a bloody guess. Oh, alright then. I’ll tell you. Coq made 46 passes, Elneny made 49. Back in the day, Santi would make 100 while Coq would make minus 5.

This is the first time Coquelin has formed a midfield partnership with any player who didn’t significantly out-rank him. And maybe that’s exactly what his game needs right now. Maybe he’s ready.

Let me read too much into things…they like playing with each other. They “get” each other. Neither is the junior and both can express themselves.

Here’s a heatmap showing the front 4’s touches – Welbeck-Iwobi dominating the left side, Alexis-Ozil the right side. The middle has been vacated giving their defence all sorts of conundrums.

Let’s add in our 2 fullbacks. Here is the heatmap for Welbeck-Iwobi-Monreal and Alexis-Ozil-Bellerin. 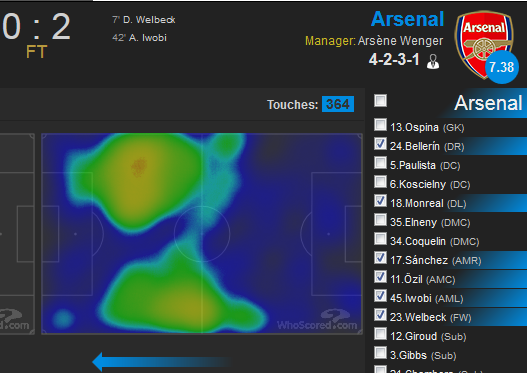 No one is clogging the middle, everyone is stretching their defence. Oh what a breath of fresh air, like the Sirocco winds blowing from the Sahara, over Egypt, the Mediterranean, into Southern Europe and all the way up the middle of Goodison Park. Speaking of Egypt, here is the heat map with Coquelneny added in for good measure. 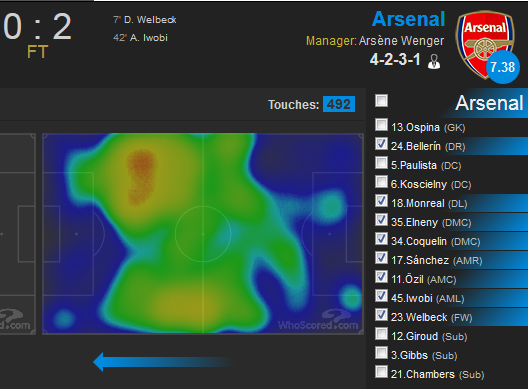 Ahhhh. That’s what those 23 km of running gets you, is it? Cover.

Anyway, the pressure applied by Welbeck & Sons (Alex and Alexis) meant the front 3 fulfilled their mission to pressure the nervous Everton defence and set the stage for Coquelin to pounce on every rushed, imprudent pass.

But Danny. It was fitting he should score the first, and off the intricate patterns weaved by Ozil and Alexis who thanked Welbeck for freeing up all that space in the final third for everyone with his tireless, unselfish, constant-motion. And more impressive to me were the lung-bursting runs back to help out midfield and defence when we were in danger of being breached. I think I counted 4 runs in the 1st half. Long runs. No. Not runs. Sprints. The one where he stormed back like a scorched bat out of hell to cover Coquelin and to catch Ross Barkley was breath-taking. “All in.”

Sometimes a striker scores a great goal like Danny’s, and it ought to be, it must be, the match winner. It deserves it. But then his side concedes and that great goal becomes just a goal. A goal in a game you drew. Yeah, well, Danny wasn’t having that. He scored a peach of a goal, and he would defend that goal himself, if that’s what it took.

Had there been a penalty against us, Danny would have decked Ospina, punched out his replacement, taken the gloves, and guessed the right way. HIS GOAL WOULD STAND.

So my point is…Arsene…don’t change anything. Not. A. Thing. Our season is a ticking time-bomb that we were feverishly prodding and probing clueslessly to disarm when something we did miraculously stopped the ticking. We’re not quite sure what we did…but the ticking stopped. It could start up again just as suddenly. But right now the bomb has stopped ticking and that’s soooooo much better than the alternative.

Iwobi is just a kid and kids are inconsistent, so if there is a wire that needs snipping it could turn out to be him. And if so, I’d have Ramsey or Campbell ready in the wings. But until A-Wob wobbles, let Welbeck & Sons run their little scrap and salvage business all over the final third, and let Coquelneny bring the midfield heat.

“Oh, but don’t you think we should play with Coq and Elneny away from home where teams will come at us but at the Emirates where visiting teams…” Oh, shut the fuck up. We’re playing the same team till the bomb starts ticking. You pretentious pratt.

← The Premier League Title Is In Our Hands.
The 1st Rule Of Mesut Özil Club…Or How I learned To Löw Jogi →